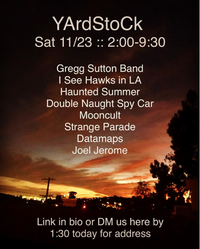 Haunted Summer Haunted Summer. 19,328 likes · 2 talking about this. Follow us on spotify: https://open.spotify.com/artist/3LXb2...

Ever since they played with Radar Brothers at Alex's in Long Beach, I've watched this band evolve from great to amazing. Their first album is one of my favorite things to come out of 2016 and their new material takes it to a new level. Plugged or unplugged (and I can't say this about most bands in their genre), their songs are a thing of sheer, intense beauty.

I SEE HAWKS IN L.A. - (our guitarists awesome country/folk band)

They've become one of my favorite live shows in Los Angeles. Super fun country/folk with a great vibe, great humor and I hate that my band has to follow them -- softened only by the fact that we share a guitarist.

DATAMAPS https://www.facebook.com/Datamaps-2275083139406052/ {Not to be missed. For some reason, yahoo isn't giving Datamaps a big pretty square preview-thing like the rest ... but if any new LA band deserves its own square-thingy ...

Wikipedia: "Gregg has written hits for Sam Brown ("Stop!"), Joe Cocker ("Tonight" and seven others) and contributed songs to Maria McKee, Lone Justice, John McVie, Percy Sledge, Billy Ray Cyrus, Tal Bachman, The Commitments, The Human League, Tom Jones, The Nighthawks, Edgar Winter, Eric Burdon" ... and about 8,000 others but you get the idea. His Sunday morning live streaming "show" has become a staple of my Sunday mornings and I'm honored to have him grace the backyard. Oh, he also played bass for Bob Dylan on Real Live and for Mick Taylor, Dave Alvin, KGB (along with Carmine Appice), Tony Gilkyson ... okay, I'll shut up now.

My personal favorite 'new' local band in LA -- and they keep getting better. A beautiful mash of good, emotive songwriting, a beautiful, shoegazey sound and 'gothy' intensity. Just see them.

Strange Parade (my new-ish band. last chance to see it for a while)

Strange Parade - "The Watchers" - Highland Park Bowl 10/4/19 Enjoy the videos and music you love, upload original content, and share it all with friends, family, and the wor... Play

SET TIMES TBD -- I'll update the FB invite as the schedule gets locked in: Log In or Sign Up to View